Ran some Fast-Forward today. Manny and Min's players couldn't make, so we head Mayweather and two newcomers to the Tokyo Bay Area Crew - Alexey Pcholsky and Yop Hyun-Su.
What Happened
• The Crew met Herr Schwarz in a Dorian Gray-themed VR Room and got briefed: Ginseng, a Samsara Industries subsidiary, are hiring the crew. They were to extract a Dr. Hernandez from a Xipe Totec research facility (re-purposed off-shore oil rig). She'd been taken hostage by a crew of ecoterrorists a few hours earlier, and they would have a 20h window of opportunity to grab her and get her to her new corporation before her employees would notice what was going on and send their own strike team. There's also a cop, Lt. Watanabe, who needs rescuing in the refugee flotilla, and can provide additional intel.
• They meet the helicopter pilot who's gonna carry them around on missions - Beard, or "BB". Very eager guy. And decide to go rescue Watanabe, who they can track on satellite link. He's held in the hold of a shady restaurant place.
• To avoid attracting unwanted attention, they'll navigate the flotilla (a sort of floating shantytown in the Kamusi Sacrificed Zone) by motorboat. Some young thugs try to extort some money out of leaving their boat alone, but are outweirded by Alexei.
• At the restaurant, the streetwise Hyun-Su and drug-dealing Mayweather get the barman to let them go in the back, where they meet a creepy eel-faced guy with a combat full prosthetic body and his two goons. They start negotiating, but things go south quick. Quicker even due to wired reflexes, Alexei takes the Eel down and Hyun-Su goes down the hold where he grabs a very injured but still spunky Watanabe. They take the neural chip of the Eel as a "hostage" and get away. At the end, Watanabe throws the chip in the sea and they all run in the refugee crowd.
That's another gang the crew made enemies of.
• Watanabe is thankful and tells them what he knows - the terrorists' numbers, where they come from, and how they recently acquired an amphibious walking tank! Now that's something new to account for. Eventually they thank him and let him loose away from the Sacrificed Zone so he doesn't get stabbed on his way out.
• Party decided to do some shopping - a limpet mine, a pair of frag grenades, a flashbang and some silencers for their guns.
• The plan would be: the chopper goes in for a distraction if the PCs get caught, and they'll go by boat to infiltrate the oil rig in the middle of the night. It went decently enough.

• They approached by boat as planned, took a guard down and took his clothes and armour. They then navigated the base not really sure where to find the scientist. They quickly got found out though, and hid in the lab, where, luckily, the scientist and her assistants were in. Apparently not under any supervision from the "hostage takers". 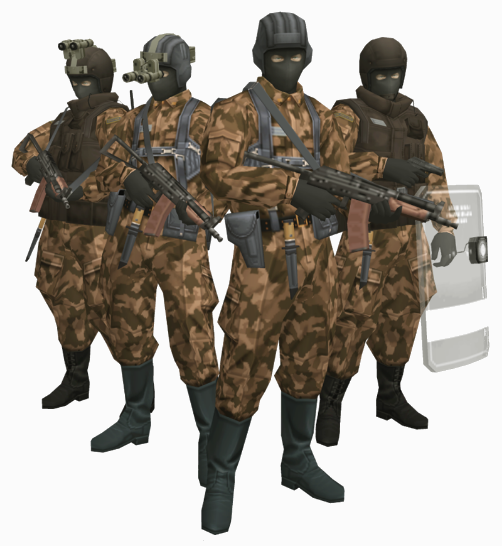 • At this point, a misunderstanding got cleared up: Dr. Hernandez was here of her own volition, working alongside the terrorists. But the time was for action, and the crew didn't want to hear much of it. They had a job to do and a walking tank was crawling on the roof, trying to get to them.
• So Hyun-Su blew it up with a limpet mine from below. Some more grenades and everyone was running away to the motorboat. Another well placed frag took care of the tank, and a bunch of the ecoterrorists got killed. No civilian casualties; though the scientist was not happy about the situation.
• They got her to a safe house where men in black were waiting, they took her and gave the party their money. Later this week, news of a new breakthrough in pharmaceutical science revealed that the super-rich could know reverse the natural degeneration of their cells, and essentially increase their lifespans tenfolds. All thanks to the work of Ginseng's top scientists.
Some Notes
• The new rules work pretty well I think. Skipping the damage roll was the right call. Since it's 2d6 I can also just ad lib any throw by going "just hit X+", I love it.
• The party went fairly grey/black hat on this one. We were nearly out of time IRL and they were in a hurry IG too, so they didn't really try to listen to how the scientist lady was planning on faking her death and distributing her research data on the global web.
Posted by Wizard Lizard at 8:08 PM