Skorne is now PWYW on Itch.io and licenced for reuse under CC BY 4.0 (share and remix, even commercially, with attribution to original source), and that is radical.
So here's a quick and dirty cyberpunk hack.
Been missing you wendi, where you at queen? I hope you're OK out here.

One player is the referee. The other players are cyberpunks, crazy queer losers raging against the machine that owns humanity and the Earth. The enemy is a blind, deaf, idiot God that runs on blood. Take care of your own. Free datagrid slaves if they even want saving. Don't go down without a fight.

To play, bring these rules. Write with red pens over obsolete administrative stuff - bills or legal paperwork with your dead name on it. You'll also need two six-sided dice (2d6). These rules will be marked up during play if not outright destroyed.

Play safe. Set lines not to cross and veils for when to fade to black. Rewind, fast-forward and skip as needed for comfort and pacing. Take breaks when you need them. Everyone's responsible for everyone else's having a good time.

1:4 Moxy is fucking, lying and using the Grid

2:1 The vast majority of actions described require a quick judgment call to resolve. Cyberpunks should seek to leverage their environment, use their items and common sense, and clearly declare their actions. The consequences of these described actions follow accordingly.

2:2 When a cyberpunk takes a risky action, the referee rolls 2d6. If the action is against another character, add the appropriate ability of that character.

2:3 The player then rolls 2d6 and adds the appropriate ability.

2:4 If the player rolls higher, they pass. If the referee rolls higher, something terrible happens. If tied, do both or roll again, referee's choice.

2:5 If an uncertain situation that falls outside of the three abilities, make a Luck roll by rolling 1d6. A high roll favors the players, a low roll does not. The referee will state what the results mean before or after the roll.

3:1 Turns are taken simultaneously. A turn is long enough to move and perform an action in either order.

3:2 A character may choose to take a more effective Slow action by stating their intent and target to take effect at the end of the next turn. They may move before or after performing the Slow action, but if it is impossible, then no action occurs. Slow attack actions are Enhanced.

3:3 A cyberpunk has ten item slots, with each slot allowing for one item. Smaller items can be grouped and take up only one slot. Any heavy or bulky item like armor, shields, or two handed weapons take up two slots.

3:4 When a cyberpunk takes a strenuous action or endures harsh conditions, they mark Fatigue. Each Fatigue occupies one item slot, reducing how many items a cyberpunk can carry.

4:1 Attack actions deal damage. Damage is dealt in hits with one hit for each attack. Damage is instant, no roll required.

4:3 Attacks that are Impaired by obstacles, restraints, or other poor positioning deal zero hits.

4:4 Blast attacks deal damage to all targets in that area.

4:5 Cyberpunks have three hits. Heavy armor may be broken instantly by the wearer to negate all damage dealt by attackers until the wearer's next turn. Shields provide the same effect, but require a hand to use.

4:6 Each attack a cyberpunk makes while holding a two handed melee weapon may be Enhanced by marking Fatigue. Holding two one-handed weapons works the same.

4:7 Ranged weapons can be used in melee, pistol-whip a pig and use him as a human shield against his friends.

4:8 Manoeuvers and injuries can be forced upon an enemy as a trade - either they take a Hit, or they suffer the effect. Out of hit, one is at the mercy of their enemies.

5:1 When an enemy reaches half of their maximum hits, they are Bloodied. The referee may make a Luck roll to see if their morale breaks. This rule does not apply to cyberpunks.

5:3 A cyberpunk with ten Fatigue marked dies of exhaustion.

5:4 When a cyberpunk dies, roll up a new character: they've got a friend or loved one who's really pissed off now.

5:5 Restore all hits when combat has ended.

5:6 Clear all marked Fatigue after seven days of resting.

6:1 Everything is connected. Smile for the camera.

6:2 Anyone can try to mess with advanced tech like cameras, security doors, self-driving cars or industrial machinery, but doing so will attract the attention of the SysOps. Young deckheads think they're hot shit and get fried.

6:3 Hacking is a Slow action that requires the use of one free hand.

6:4 Instead of rolling 2d6, the player rolls as many d6s as they dare and adds Moxy.

6:5 Draw a Heat clock with six quadrants. Each die that shows a '6' increases the Heat level for the remainder of the session. The more Heat, the more SysOps and the pigs are paying attention to you.

6:6 If two or more dice show '6', they're onto you and are coming right now to make the situation way, way worse. If the Heat clock is filled, they've traced your signal back to your hideout, you're basically fucked. Tear out your character sheets. Others will follow.

[WILL LINK TO AN EXAMPLE OF PLAY WHEN I RUN IT]

8:1 First, give your cyberpunk a name and pronouns.

8:3 You start with 6 Credits. Before you buy equipment:

If your character isn't a man, lose 1 Credit.

In addition, each session you must pay 1 Credit each for meds, food, and lodgings.

-Dumpster diving and squats are free but roll d6, on a 1-3 something Bad happened because of your living conditions.

-If you moonlight as a hooker, thug, courrier etc. to cover expenses, get 1-3 Credits but mark as much Fatigue.

One credit can get you some bootleg drugs or medications, kibbles for food, a week in a coffin hotel, a handgun, taser or spray mace. Also basic tools and supplies.

Two credits can get you a sawed-off shotgun or a kevlar vest, some decent food and drugs, a week's rent in a tiny appartment, or hi-tech jury rigged gadgets that break on a roll of 1 when used.

Three credits will buy fancier stuff, assuming you can get somebody to get you access, which generally involves a favor and complication of some kind.

Oh and as for military grade firearms or protections, futuristic gadgets, cybernetics that make you "more than human"... You can strip it off the corpse of some pig and try to jailbreak the ID-print lock. Careful though, some of these have built-in tracers or self-destruct functions. 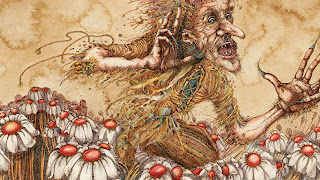 An Example of FKR (near-)diceless combat (with Cosmic Orrery!)