What a game! Last night, I gathered a bunch of nice people and we played Los Angeles '89! Although I ended up relying on Fast-Forward's combat system to add some dicey fun to the climax.

Ricky Spanish (in their thirties)
- Tough as Nails, Silent as a Grave
- I'm not paranoid, I'm just aware about the military-industrial complex and the CIA
- Techie (can fix anything given time, and jury rig stuff to hold out in a pinch)
- Adrenaline Junkie

Vince Vicetti (midlife crisis)
- Hard, Bulky, Overweight
- It's not that I'm using, it's just that my body developed this massive drug-deficiency
- I Know a Guy
- Greedy Bastard

Duck (old dog, in their fifties)
- Magnetic personality
- Thinks he's a priest of some sort, misquotes scriptures at inopportune times
- Bookworm (knows science and history and stuff)
- ON A MISSION FROM GOD - REVENGE WILL COME (upon who, we don't know) 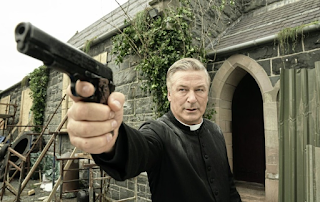 Except for Dyna-Mike, the crew just got out of county jail near L.A. - Yuri, a sweatie russian handyman working for their patron, Hatchet Harry, picks them up in his berline and leads them back into town. They go through a shady sex shop/porn studio and up a few floors where Hatchet Harry awaits in his office. They all have some good history with him, and Dyna-Mike is new but basically family already. 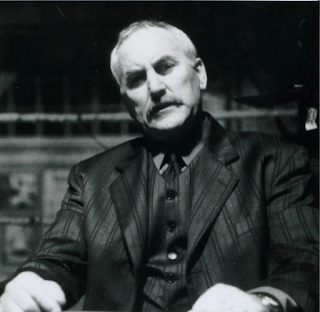 H.H. is calm-angry - even a little bit happy to see his boys again. After some introductions, he explains how some idiots tried to steal from him after doing a deal for him. He had them trade AKs for cash, and they never brought the cash back. Interrogating one of their friends gave him their hideout (a motel on the outskirts of town). Now he wants the crew to go liquidate these clowns and get his money back.

They grab a sawed-off shotgun, a silenced uzi and a pair of walthers, as well as Yuri's berline, and go recon the motel and gas station on the other side of the road.

There's a straight-edge kid begrudgingly washing his mom's Alfa Romeo on the parking, and a bored reception desk lady reading tabloids. Kaiser and Ricky go talk with the kid, Duck talks to the receptionist, while Dyna-Mike and Vince scout out the back. Then they all gather at the continental breakfast and share their intel - five goons are supposedly in room 204. Kaiser slashed their tires in case they try to run off. Two sheriffs interrupt the gang, who switch to talking about that wedding they're all going to (thus the Reservoir Dogs fancy suits, and the priest). After the sheriffs leave, the crew decides to go in.

The idiots aren't alive anymore. Well, one of them is, all slashed up and gagged in the bathroom. There's a corpse floating in the tub, with a white lotus flower on it. Plane tickets in the gagged guy's pocket betray their intentions to betray Mr. Harry. He says some chinese gangsters wearing all-white suits and carrying hatchets and knives came and took the briefcase. Crew puts him in their trunk and goes back to Hatchet Harry.

Harry is even more pissed once he learns the whole story, and sends the poor guy to get eaten by dogs. He then calls the White Lotus Syndicate boss, Mr. Shen, and tries to smooth things out - turns out Shen didn't orchestrate the fuckup. A lieutenant he banished, Sun Po, is responsible and is about to get on a train to Vancouver, so better go and get him if Harry wants his money back. Shen agrees to not interfere. Crew runs off to grab some more gear from a russian connection called Igor - they get tear gas, two gas masks and two AKs.

Rushing through the city, they narrowly avoid a confrontation with the cops as they see the "straight-edge" kid zoom past them in the Alfa Romeo, attracting the patrol's attention. They jump in the train right before it leaves and start to scout it out. Dyna-Mike finds four shady-looking chinese dudes and a giant bald guy with a dragon tattoo, plus they got the briefcase. They prepare - Dyna-Mike will throw a gas canister in the car, with Kaiser and Ricky in the car surrounding the gangsters. They'll put on gas masks and blow them away with the AKs. Duck and Vince will handle crowd control and serve as back up if needed. The plan goes almost without a hitch.

That is, a handful of intense seconds later, all the gangsters are dead or dying save for Sun Po who Mac 10'd Kaiser, crawling out of the car on the floor bleeding out, and is now clobbering Ricky Spanish to death with his pistol's butt. Until he gets shanked repeatedly by Duck and finally lets go of the money. At this point, Kaiser is dying, Ricky is injured, and the car is filled with smoke and dead people. An old lady got shot early on by Vince too - it was an accident though.

So now Dyna-Mike is running towards the front of the train to make the pilot stop the train so they can all jump out, and three guys get up and hold him up screaming FBI, GET DOWN ON THE FLOOR!

And he pulls a Die Hard on them, throwing his pipe bomb at them once he's on the floor looking like he surrendered.

Lots more smoke and screaming and ears ringing. The crew jumps off the train, rolls in the shrublands, and call Yuri so he can hurry the f up and get them to safety. Sirens in the distance. Kaiser's bleeding out, smoking his last(?) cigarette. They got the briefcase though. Roll credits.

I love one-shots. We played about 2h30, maybe 2h20, but a reasonable amount of stuff got done in that time. Big group with energy meant I didn't have to do much to make things go forward. I did skip beats - I initially planned some investigation around Chinatown, as well as making the FBI more of a threat, but to make it all fit the schedule, I ended up letting Hatchet Harry "solve" the Chinatown issue and summing up the FBI as three dangerous guys, which Dyna-Mike's player handled with the method he had been itching to use all game long, so I think that's still a win. The epilogue was a bit rushed and loosey as my migraine was getting pretty much unbearable by the end of the evening, but I think there's value in leaving things in somewhat of a cliffhanger. Did Kaiser survive? Did the crew end up in prison again? Did they all die in a glorious shootout with the cops? Who knows. I was aiming for Reservoir Dogs and I think it pretty much worked. We even had that kind of late Tarantino rythm where everything is somewhat quiet and low-key until the last few scenes where it's just people dying left and right.