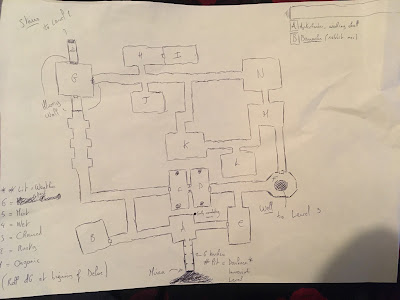 Did the map during finals. The only room that isn't optional is room A. It's not that branching though, you basically get two options every time. The well goes directly to level 3 and the access to level 2 is hidden. This way when people find stairs up from level 3 and end up somewhere unknown they're going to freak out. There's a new dungeon weather table, it is way better than the old one.

6 = Dark corridors. Without light source, you will be eaten by the Grue. Business as usual.

5 = Misty, you can notice shapes but remain unsure of what they are until they are very close. Unnatural light, as if outside. The walls and ceiling seem further away than usual. Encounter distances are halved.

1 = Organic, bleeding walls, writhing masses of flesh, droning noise, eyes and appendages growing out of the very surfaces. Redvald is alive and it is awake. Visions of the Obelisk. Whispers in your bones. IT wants to be freed. IT must feed. You instinctively know the fastest way to go DEEPER, but every injury caused is extra bad.

There is a Painting of Castle Redvald that you enter this level through. From within the castle, the exit looks like a mirror. If you break it, you will have to find another way out. The painting is bulky but can be transported. It is supernaturally resistant but if you burn it long enough you will ruin it and you won't be able to enter Redvald by this mean anymore. Other ways of entry exist. None of them are easy.

This forces me to make my own and to consider any monster with a certain degree of care.
All of them will get proper treatment when I want to use a ready-made monster, which should make them interesting.

These are all so cool I never get tired of them, and highly atmospheric on their own. They're my bread and butter. So mostly undead, pests, and people.

A Few Monsters Get a Special Treatment
There are four Elementals. I am not using "Djinn" and "Efreet" because I have no idea how to make them not orientalist and I already have a ton of interesting stuff that I can use as spirits/tricksters and the likes (such as The Goblin).

There Are No Restrictions on Monsters I Come Up With
I allow myself to make groups of monstrous creatures and the likes. Strange new species. I will avoid making monstrous "demihumans" though - these will remain as either unique individuals (like the Elf, the Ogre, etc.) or just be humans with weirdo cultures rather than pointy ears as an excuse to otherize them and do a lil' genocide.

By the way that hack I wrote yesterday? That was just to get it out of my system. Here's a resolution.

I Am Addicted to Writing Rulesets
Heck, it's my healthiest addictive behavior pattern but it IS there. I'm going to try and abstain from writing new rulesets, because frankly, I really don't need too. I know exactly what I like to do rules-wise with the FKR framework, and anything I use can be so modular that it won't be fitted into a tight and cohesive game. Toolboxes, not rulebooks, yadda yadda.

Just for my peace of mind, as a reminder, here are THE RULES THAT ALWAYS WORK THE BEST so I should just stop writing more and write fiction stuff instead! (for me, that is)

Saving Throws are rolled with 2d6, referee sets a target number. Low roll is a disaster, close to the target might be a setback, partial success etc. High roll is a success, the higher the roll the better. Sometimes I'll use 6- / 7-9 / 10+, sometimes not. When using the latter, rolling 3d6 and keeping the highest or lowest is the best way to do modifiers without adding math. This covers almost everything.

Luck Rolls and the likes are 1d6, high is good, low is bad. X-in-6 chances work well as oracles too.

OD&D and Classic Traveller procedures are IN. I love morale, reaction, surprise (from Traveller!), simultaneous initiative etc. So I'm using that and you can't stop me.

Adventure for Adventure's Sake this is the most controversial (to me from me) change. I don't really care about numbers going up. You don't need a carrot to go explore a dungeon, that's what you sit down at the table to play. Treasure is its own reward. The greed of player-characters does not need to be translated into greed for the players. So no levels or XP or whatever.

Hits, no to hit roll, no damage, ala Any Planet is Earth / Skorne. Cause it works very very very well. Player-Characters have four hits. An improvised weapon deals 1 Hit. A one-handed melee weapon deals 2 Hits. A heavy, two-handed weapon (or a bow or crossbow) deals 3 Hits. Magical attacks such as a fireball or deadly attacks from huge monsters can deal 4 or more Hits at once. Armor and Shield help or hinder in different situations, much like how different weapons and tactics should increase or lower Hits received or dealt. I don't mind having them be sacrificed to grant an extra Hit either. Players get a Death Save at 0 Hits or worse. On 10+ you're still standing with 1 Hit. 7-9 you're bleeding out. This will leave a mark of some kind, either physical or psychological. 6- you are dead, dead, dead.

For Mass Combat I might still use some Chainmail stuff, cause it just feels nice to roll a bunch of d6 and count who's dead. It's just that there are no more heroes. Oh hey that's a good name for the ruleset. No Heroes!

Support Me on Itch.io