Trigger Warning - this semi-autobiographical post contains occasional mentions of mental health issues, self-harm, suicide and abusive relationships. And I'm going to go from very light-hearted talks about tRPG stuff to terrible real-life stuff, so if you need to preserve yourself, you can skip this.

I'm 25. For the longest time, I didn't keep any records, or pictures. I burned or tore apart everything I wrote, drew, made. I hated pictures of myself. Embarassingly, I also have a tendency to do that with official papers, which made it tricky to find the stuff I needed for my Master's Application.
Thankfully, my ex had hidden important stuff in a folder for me to find someday when I'd need it.
And old me kept some records of the past. Tabletop Gaming Stuff.
So here's another extremely self-indulgent post about the past, in pictures!

I was nine when my parents said I needed to pick some kind of after-school activity. I didn't have any friends, I didn't do sports, and school was carnage. I found an ad for "the drakelings, adventure games" and signed up at a local club. Three rooms shared between two clubs - the larger one was for the wargamers, with whom a friendly rivalry was quickly established. The other two rooms were occupied by 50-70 year old grognards. Very welcoming and friendly. Did not make fun of me for my neurodivergence. Did not mind that I was barely able to speak for about the first month. I was fairly eloquent, just too shy and scared to talk out loud.

Going from left to right:

Alice
1st level Chaotic Neutral Half-Elf Thief - the first PC I wanted an illustration for, and I think my third or fourth character? She played the flute, danced, pilfered pockets and overall was mainly there to entertain and be nice to people. I named her after the girl I kept dreaming of back then. The same girl with purple or red hair and a punk-ish look I put in my diaries and journals and eventually turned out to be. I go by Alyx nowadays.

Andrade Silvia (an alias of Richard Montecchio)
3rd level Bard, True Neutral.
An ambiguously evil noble of my Aëdamphia campaign. Elfen blood and a bastard.
He fled his responsibilities to take up a life of adventuring (another cover, for he was secretly seeking the Immortals to inflict the Misery upon them and restore them to mortaldom. It's complicated, I ran that campaign from 9 to like 14-15 years old.)

No Name (Varies)
1st level Psi Grey Elf Thief. True Neutral.
A one-shot character for when my middle school best friend offered to run a game. They had 19 DEX.
They tricked a King into surrendering his kingdom to their best friend.

Cairn "Featherless"
A sylphling (some kind of kender) from Earthdawn. Didn't make this one, just picked an archetype I liked. That must have been the second time I played with the grognards, so I made the character a mute.
She stalked a bunch of heroes for a few hours.

Melvin Aldric Menethil Von Something (erased)
My strongest AD&D 2 characters, having reached level 5. Thus the titles. A Lawful Neutral Magic-User serving the true neutral God of balance "Trag'Oul". I think he got stabbed to death by magic skeletons, but the GM cheated because I had tears in my eyes. I felt robbed of agency when he declared I survived when I clearly should have died, so I retired the character after that. He lives in a cottage somewhere on the border between Aëdamphia and the border of the Empire.

A few characters from the rare times I was a player in these years. See, I picked up GMing pretty fast and mainly got my enjoyment from tRPGs out of creating worlds and letting people wreck them by having sandbox adventures within. Highly improv-based, too.

Salomé "Shepard"
A paranoid psychology student from Z-Corps. Don't remember her much.

Daniel Darcourt
From Black Flag, a Pirate RPG. He was an alcoholic pilot and doctor (I often favored healers)

Hazel Lynne
I think that was from a GURPS Dragonlance campaign that never went past the first session.
I drew programmer socks on her. She's some kind of thief I think?

Louise Demarches
Berlin XVIII is a COP tRPG (ACAB though). Louise was basically Agent Starling from Silence of the Lamb, and yes I first watched this movie around age 11 or 12, tops.

Look at that, I made friends, actual friends! How you ask? By running games for the new kids curious about tRPGs, and then them dragging me to wherever they went until I realized they actually did so because they liked me and I could hang out with them even if I wasn't GMing for them.

Tidus Cornegouille & Harstoudh 18th
Albert's first characters in the Aëdamphia campaign. A Dwarven Cleric and a Human Cleric.
Actually Good (well, Chaotic Good and Lawful Neutral) characters!
I'm pretty sure Tidus took part in the Gnomish Civil War, in which the Dwarves overthrew their Salt Gnomes masters and destroyed the underground city of Gnomegrad. Did I mention the setting I came up with at age 9 dealt with topics such as slavery, determinism, fate and Great Men vs Class Struggle? I was like, super into communism before my first depression

Iris Rougefer
Was a human mercenary FOR MERCADOR ONLY. No idea what that means, but hey, fifth level! 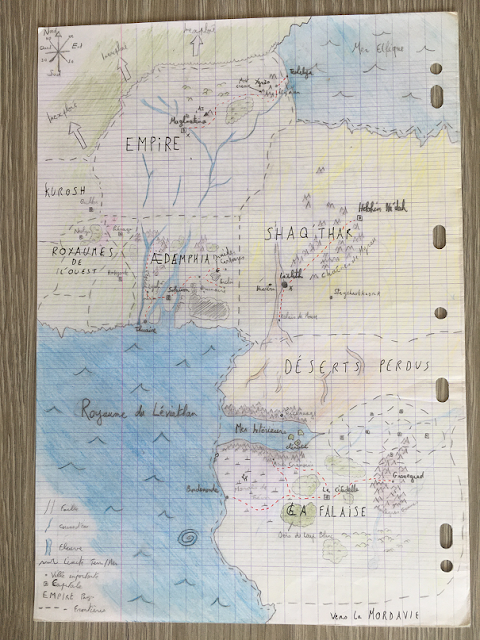 I wrote about Aëdamphia before. It was a fun setting. The Cat Folks from Shaq' Tar were a tad problematic, but besides that, I think I could probably run it as it was, if I wanted to. 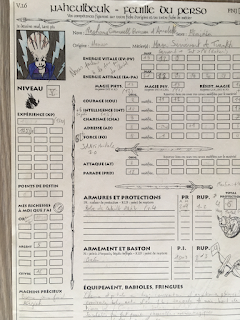 Rezhan Cornwell, Slayer of Annabelle
Was a Black Mage of Tzinntch (yes, Tzinntch, not Tzeentch, this is Naheulbeuk!)
My longest running character in a 3 or so years long campaign. Started out as a fairly benign evil wizard. Got mutated into Evil Megamind. Grew tentacles. At some point he turned into a woman. Started speaking in plural first person as he grew inhabited by others. Had a SAN score even though there is no SAN system in Naheulbeuk. Turned a Paladin of Light into a Death Knight follower. Witnessed the gruesome death of his cherished apprentice, which broke him further. Tried to ascend to Godhood and betray his Patron God of Magic, nearly succeeded, but his best friend (an engineer who at this point had grown wings and rode a giant dire sheep) stopped him just short of victory.

Then he put his finger guns to his temple and killed himself with a magic zap while hallucinating his dead apprentice.

There's a lot to unpack here. That illustration? That was M. I met her between middle and high school. We were the best friends in the world for a while. She drew everything you'll see later down the line. Save for the two years I was in a relationship in High School, we were basically inseperable. These are not happy memories, exactly. I was suicidal, dealing with complicated mental health stuff, and she was also dealing with a lot of shit which didn't help keep a healthy relationship. I like to think we both saw the best and worst the other had to offer, but it's hard not to frame a narrative where I was simply the abuser I dreaded to become as a child. Probably just guilt speaking, I've been through this before.

The apprentice's name was Aléziah. I can't for the life of me remember M's character's name, and that makes me sad, somehow.

Past this point, we move forward in time, when I'm about 16 to 20. The best years of IRL play where we'd spend entire weekends gaming are gone for good. At this point I'm a fully-fledged addict and slowly destroying myself with little to no idea why besides heartbreak and buried trauma. She's still around though. 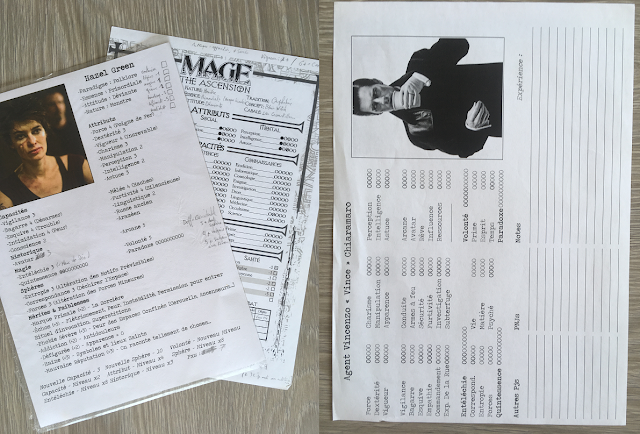 I absolutely adored Mage. We never really used the actual rules, though the GM insisted we use the character creation at the very least. Hazel Green and Vincenzo Chiarammaro were two of my three recurrent mage characters. Third one I forgot the name of but he was a John Constantine type of deal. Hazel was also known as Bloody Mary and was the scariest verbana witch around the block. Vince was literally just Dale Cooper with psychic powers. Scratch that, literally Dale Cooper.

I don't remember their names, but these were NPCs and PCs of M. The Adeptus Mechanicus ennby I think I played, but I'm not certain. To tell you the truth, my memory of anything before 2016 is very hazy or hyperspecific. I remember what I told you about these characters. I know what went on in my life, mostly. But I don't really remember much. It often feels as if these are the memories of someone else. In a way, they are. I don't feel sad for what I lost because I don't even know what is gone, I only remember that I was in pain most of the time. 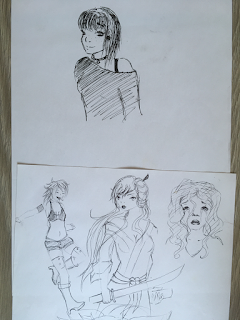 I'd often ask M to draw my characters. I don't know exactly who these were but I'm pretty sure I played them for one shots with online strangers here and there. 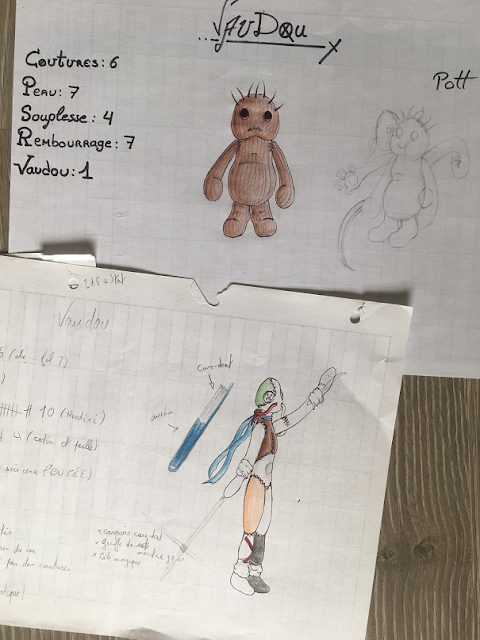 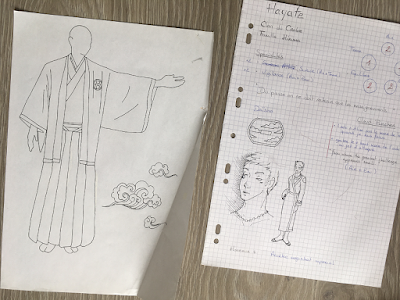 Hiruma Hayate of the Crab. M's best character over the years I'd say. Twelve sessions, about twice a month for a year, using A Wanderer's Romance to play in Rokugan. I didn't do her justice by the end of it, but I'd say it was a good campaign. Saved the world, fought a bunch of ronin assassins, Monster of the Week style. 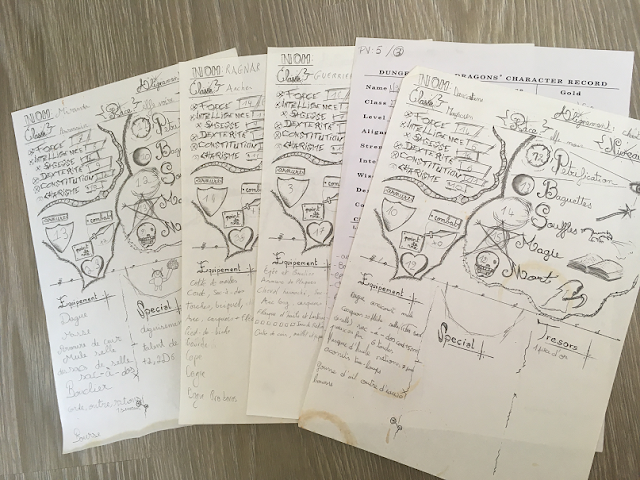 These my father made when I introduced my kid sisters to D&D and tabletop games. They look rad.
I think they had a lot of fun, maybe they'll remember more than I do when they grow up.
Hopefully they will. 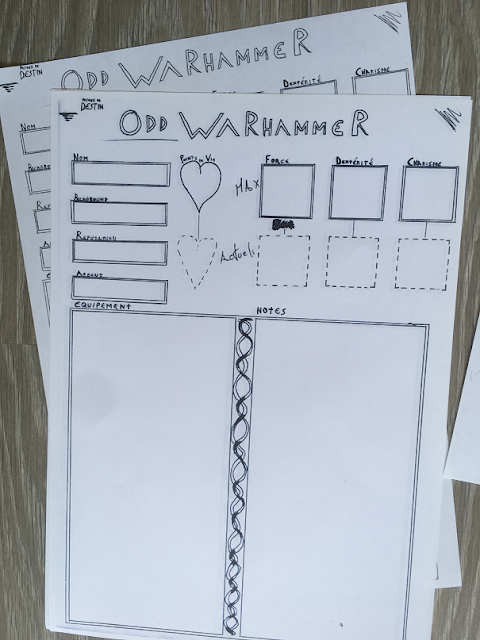 Hey now this I can talk about! I made this character sheet for one of my early attempts at using Into the Odd to run Warhammer! I often go back to this combo, it appeals to me on some primordial level. I think the sheet looks neat. 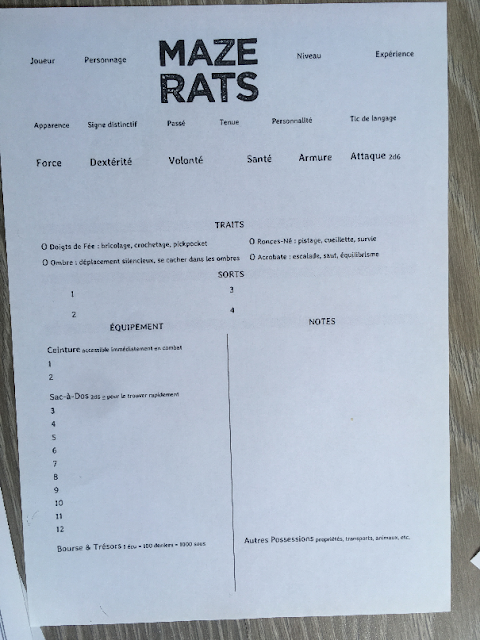 I wanted a big "serious" A4 sheet for Maze Rats because people told me rules-light games didn't support campaign play, so I figured it had to do with presentation. It's still mostly blank spaces cause I had already been bitten by the minimalism bug. 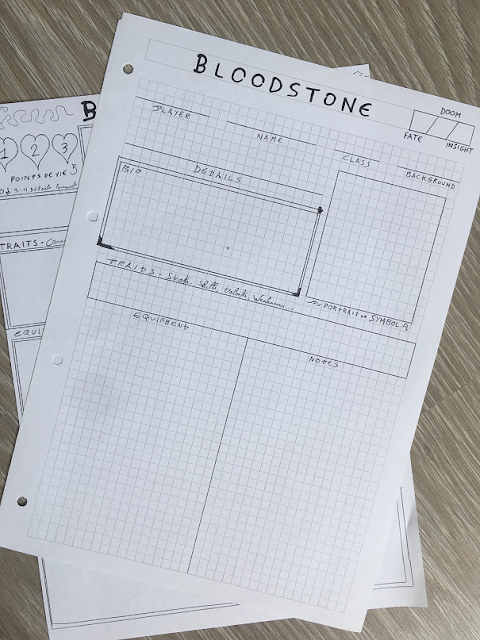 Bloodstone eventually became Murdersoup, one of the first few games I published on Itch.io.

These games I've run and played in left me vivid images. Well, mostly the ones I ran really.
Memories I can hold onto as truthful, without a doubt. Memories that accompanied beautiful moments of sharing and bonding, of camaraderie and laughter with friends, sometimes lovers, sometimes just passerbyes in my life with whom I shared the simple joy of tabletop gaming, even for an evening.
I'm not destroying these, I'm keeping them, back in the folder where Lu put them. Just in case I forget.

Posted by Wizard Lizard at 2:23 PM

Support Me on Itch.io