By now, everyone and their mother knows about the wonderful, wonderful game that is the Original edition of Dungeons & Dragons, thanks to Labyrinth Lord Original Edition Companion, Swords & Wizardry: Whitebox (and its descendant White Box - Fantastic Medieval Adventures) and truly scholarly Delving Deeper with its solid V4 and annotated V5 in the works.

This post isn't about these games. Instead, I want to talk about a bunch of sneaky games that didn't get as much coverage as they should have, considering how good they are. In no particular order: 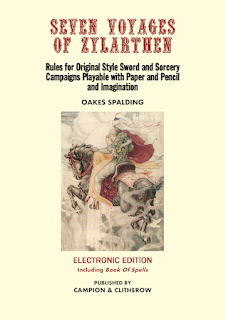 7VZ (SVZ?) is a re-statement of OD&D that focuses on the earlier fiction that inspired the fantasy writers of the Appendix N - stuff like ancient mythology, folklore and fairy tales. It's complete with a bestiary, spells and GM guidance (ala Volume 3: The Wilderness & Underground Adventures), with an old-school-ish layout and font but actually organized well. Here are some of the reasons why it's cool: it made weapons vs armor class easy with a nice mix of attack matrices and attack bonus, it's Death & Dismemberment table is excellent (sometimes brutal, sometimes merciful, but it's never a good idea to go down to zero hit points) and followed by surgery rules which make use of one of my favorite bit from the original game: Withstand Adversity (later renamed Survive Shock for AD&D).
The writing is evocative but not too verbose, stuff is clearly laid out so that a clever nerdy kid could figure out how to D&D from this book alone. The Electronic Edition comes as an all-in-one book but it used to be a bunch of tiny booklets about the size of the originals (except there's 4 for some reason).


Torch & Sword
No cover, but it's FREE!
This one is all about minimalism. The presentation is extremely simple, you only get the stuff from Men & Magic and it's not as in-depth as, say, Delving Deeper, but it gets the job done with minimal word and page count. It uses Fighting Capability and some ancestor of Delta's Target 20 system. Overall a solid little bunch of rules which can be used as an example of how little rules you actually need to play the original D&D.


Treasure Hunters
(can't find a link on the blog, you can email the author for a copy)

I just discovered this game and I have to say it's one of my favorite so far. It uses only d6s (or "dice" for non-nerds), with 2d6 combat and task resolution (ala Traveller Classic, without the skills). Its strong points: great layout, great writing, a deep understanding of the original game's flow and rules, but also a bunch of really good, unintrusive little rules that add flavor like the post-adventure roll (you're grimy now, and time to fix that dented sword!) or the Dwarven Poetry which explains how mostly-dwarf parties get bonuses to attack and AC because of how tactical dwarves be. I have yet to give the referee's guide an in-depth look but it seems pretty solid, covering everything important in great details (castles & domains rules included!) while keeping the wording simple and relatively accessible to non-gamers.


Mythical Journeys
The follow-up to Treasure Hunters, where the author dials back the house rules a bit to make a product compatible with most D&D stuff. Sadly there's no Referee's book or bestiary yet, but it's in the works apparently. No more thief, some supplement I rules are around but very discrete, the layout and writing is even better in this version than in Treasure Hunter.
Posted by Wizard Lizard at 1:43 PM