Today I got to run a classic that I've never really got the occasion to get into in the past (or, if I did, I didn't dare): Traveller (the 1977 edition, of course).

See, I'm not familiar with Science-Fiction. Or if I am, through a kind of cultural osmosis, I'm not confident about my knowledge of it. I don't know the "rules", if you will. I've read Dune, some K. Dick, some Clark Ashton Smith, and Dan Simmons' Hyperion, and that's really about it when it comes to books. A few more movies for visual references.

Turns out, years of playing fantasy games mean that despite not being fluent in fantasy litterature either, what I do have is familiarity and confidence in how to describe and "make work" a fantasy (or post-apocalyptic, or cyberpunk!) world. But space opera? Hard-ish Sci-Fi? That's beyond me. Anyways, I got my hands on an original copy of the 3LBB (3 Little Black Books) off Ebay, read all of Book 1, half of Book 2 and bits of Book 3 and hurriedly started a session right after some character and world generation, pretty much relying on improv.

It didn't go perfectly, but it was a decent enough session. 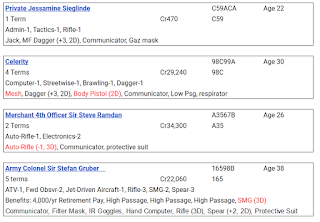 From left to right: Jessamine, Celerity, Steve & Stefan
What Happened
• The Party elected to all know each others (there's ex-lovers, a life debt and brothers-in-arms-ery), and all mustered out on Planet Matisse (E6798846, a sort of Water World with an Underwater City and a Mad Max-style Wasteland on the surface), which I generated a few hours before game time. In a crappy bar at the local starport (more like an air strip with an old terminal building) with a cranky robot for a bartender and rugged sea space men for patrons, the group considered its options. With no ship of their own, they'd have to wait at least a week until one departed from this backwater hellhole.
They asked some questions and learned there were some problems with the Order of the Trident, a sort of cult that uses sentient native Coral-life parasites for some mysterious and mystical purpose, might be kidnapping kids, but nobody can do much against them as they're backed up by Frontier Development or at least have an arrangement with them. There's also a bounty on a bunch of wastelands raiders causing trouble on the surface, and rewards for any scavenged tech brought back to FD. 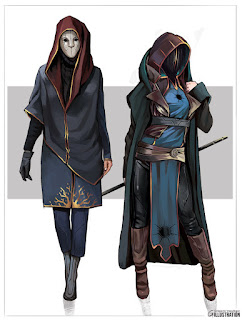 Some shady-looking locals were at the bar too

A. They could get past the security checkpoint to go down to the underwater city of Paradisio, but it involved handing over their military-grade weapons.

B. Or they could go into the wastelands on the surface and try to scavenge some tech for Frontier Development (the corporation that owns the planet) and hopefully find a shadier way to get to Paradisio, while keeping their stuff.

These guys don't trust the law much, and decided to go out into the wastes after buying some protective suits (or respirators for the cheapest members of the crew).

• On a dilapided highway towards the ruined city (and what looked like some kind of refugee camp on the map the Colonel downloaded), the party saw three dudes in robes and rifles, and avoided the encounter (that's a clearly-stated thing in Traveller! "Hey you can avoid, here are some avoidance rules" - in OD&D, these are stashed in the Wilderness travel part of the game. It's also automatic if you're a small party and have surprise).

• In the City, they sneaked into the camp and managed to pass off as locals after grabbing some robes. They learned that these were refugees from Paradisio who had been exiled by the Order of the Trident.

• The next morning, Steve shot down a camouflaged drone spying on them, and a quick jury-rig of the broken machine revealed a video feed that told the PC they were being spied on, them specifically, by the two weird masked ladies. Also some lady lost her kids, and a crazy old man talked about the faceless monsters that stole his dreams and memories, hmmm.

• After avoiding two large groups of raiders, the party found two of them running after two of the three kids. They sneaked in and took them down before the "end" of Surprise. See, in Traveller, Surprise lasts until it's "lost" (by, say, having a dude scream in pain or whatever). Here, one raider got stabbed to death, the other got stabbed/grabbed and then shot by another PC. One kid got shot by a raider before that though, but is alive and well, don't worry. The other kid was in shock but unharmed. They patched the wounded kid up, interrogated the still-living raider and brought them all back to the refugee camp after getting the location of a water purification chip (that the refugees would very much like to acquire) and the Raider's main camp location.

Post-Session Thoughts
• Classic Traveller is incredibly easy and invisible in play! I love me some 2d6, coming up with rulings on the spot is as simple as OD&D and I got a good handle on 1d6/2d6/3d6 probabilities at this point.
• The Surprise/Avoidance rules make it clear that you should avoid violence when it's not necessary. The way to-hit bonus stack up fast and strong, and how damage work also hammered in the point that this is not a power fantasy. I love this. I'm kinda glad this was showcased by the players ruining some NPCs' day, and not the other way around, as I think everyone really likes their characters and it'd have been a shame to see them go so early on.

• I gotta learn how to describe Sci-Fi stuff good. This will come, in time. Must absorb more fiction.